We need a change in the industry. All to often we defend old solutions just because we don't know the alternative. I know that sometime it might be good to slow things down and keep using the old stuff, but if that old stuff is storing state using SQL to do so everytime I don't think you're making that choice with the right reasons in mind. My contribution to this problem is a series of blog post where I'll walk you through how an alternative solution might look using event sourcing and CQRS. To store the event I'll use eventstore, and to store the view models I'll use elasticsearch.

I'm planning to write a series of post, since it is too much to cover for one post, where I will walk you through different stages of the implementation of a simple web shop. Everything will be implemented in C# and F# to start with but I might change to 100 % F#, but that is something that will come later. The code will be available in my CQRSShop repository on github. Please feel free to comment or come with pull request. Even though I'll use eventstore and elasticsearch I won't cover how to install those products. I will not cover CQRS in depth either since there is a lot of material about CQRS and what it is, this will be a more practical view of how to do things.

All the posts will be tagged so you can find them on this url: http://blog.tomasjansson.com/tag/cqrsshop/

Time to create the views

In most system you need to be able to show the data to the user in one way, so in this example I've decided to use elasticsearch. The update of the views will be taken care of by a separate service, which also make that the views will be eventual consistent. In this specific sample it will be consisten within less than half a second if everything is up and running and the service is connected to the eventstore to listen for changes.

What do we want a view of?

Since we have access to a complete audit log of the system we can basically create any view we can think of so we just have to think of a few. The views I choose to create to illustrate the integration is a list of the products so we can search for products, the customers and baskets. For the basket, customer and the orders a graph database like neo4j might make more sense so I might just do that in a future post but for now we put everything except the orders in elasticsearch. And since elasticsearch is a document/search database using lucene it will be really fast to lookup a single document as well as doing full text search.

Since this is a demo I'll show you a quick way of doing things which you might not want to do in a production system. I won't store the last read position in the stream, but instead rebuilding the views every single time the service starts. That is doable for small amount of data, but probably not something you want.

Creataing the hosting service with topshelf

To make it easier to host and debug the service I'll use topshelf, which is an great framework to create windows services. To get started with topshelf you just create a console application and then install the Topshelf nuget package. When topshelf is added to your console project update your "Program.cs" to look something like this:

That's all to it. If you build this project now you'll get an exe file which you can install as a service, and at the same time if you just try to debug it in Visual Studio that will work as well. The code above is really straightforward. It will run a service of type IndexingService and when it starts it should call the Start method and Stop on stop. It can't be much simpler than that so let's keep on going to the IndexingService.

To understand what is going on we take it piece by piece.

The Indexer class which is instantiated is a wrapper on top of Nest which is the .NET client for elasticsearch. Init is called when creating it to create the index we are going to put our documents in.

To connect to the eventstore I have a simple wrapper that can be reused for possible other subscribers of the eventstore, and I also get less code in the IndexingService. The code for the EventStoreConnectionWrapper is really simple:

Note that this is for the v 3.0 RC of eventstore, there might be minor changes for previous versions. Of course you shouldn't store the user name and password in code like this but for demo purposes it is just fine.

Creating the mapping for the events

Since we are not interested in exactly all the events as of the moment, and we need a way to know what to do for each event we create a simple mapping dictionary for that:

Here we have all the mappings in one place instead of doing some really boring if/else or switch/case programming later on.

We first have a method that will be called for each event, that was what specified in the subscription earlier.

First we get the existing document from elasticsearch, then we update it and save it again. I won't show all the handlers since they are really simple and on github.

I extracted the event deserialization to a separate class since it really doesn't have much with the indexing to do. The deserializer code looks like this:

There is one entry point, DeserializeEvent, that expects a RecordedEvent as parameter. The rest of the code is bascially just reverting the serialization of the code in the repository: https://github.com/mastoj/CQRSShop/blob/master/src/CQRSShop.Infrastructure/EventStoreDomainRepository.cs. First we check for the metadata since we have stored the type of the event in the metadata for each event. When we have the type we can deserialize the actual event data and we got our event.

To be able to index anything you need something to index, so first we define our documents that we would like to store in the index.

We have three documents that we want to index; Customer, Basket and Product. For all of them we add one attribute that tells Nest to not analyze the Id property before indexing the documents. This means that it will be searchable but only as the full value. Also, if you have an Id Nest will use that as the document id in elasticsearch.

The code I'll show to you here is probably NOT what you want in your production environment. You'll probably take advantage of features like multiple indexes, aliases and so on. This is just for demo purpose.

Let's start from the bottom, the Init method. Here we create the actual index in elasticsearch and and the mapping for our documents to that index. If we change our document structure we need to recreate the index and mapping. Then we have to simple wrapper methods; Get<T> and Index<T>.

And we are done!

Now I finished what I started, but I think I'll do at least two more posts. One where I show how to integrate neo4j, and one with a summary of what, why and answers to some of the questions some people have against this type of architecture.

Screen shots from result in elasticsearch

If we have created a customer, a product and a basket we can query elasticsearch using Sense, which is/was a plugin to chrome. I'm not sure if you need a license for it now since it moved into another product called Marvel. If we ask to search for everything you would got a result like this. 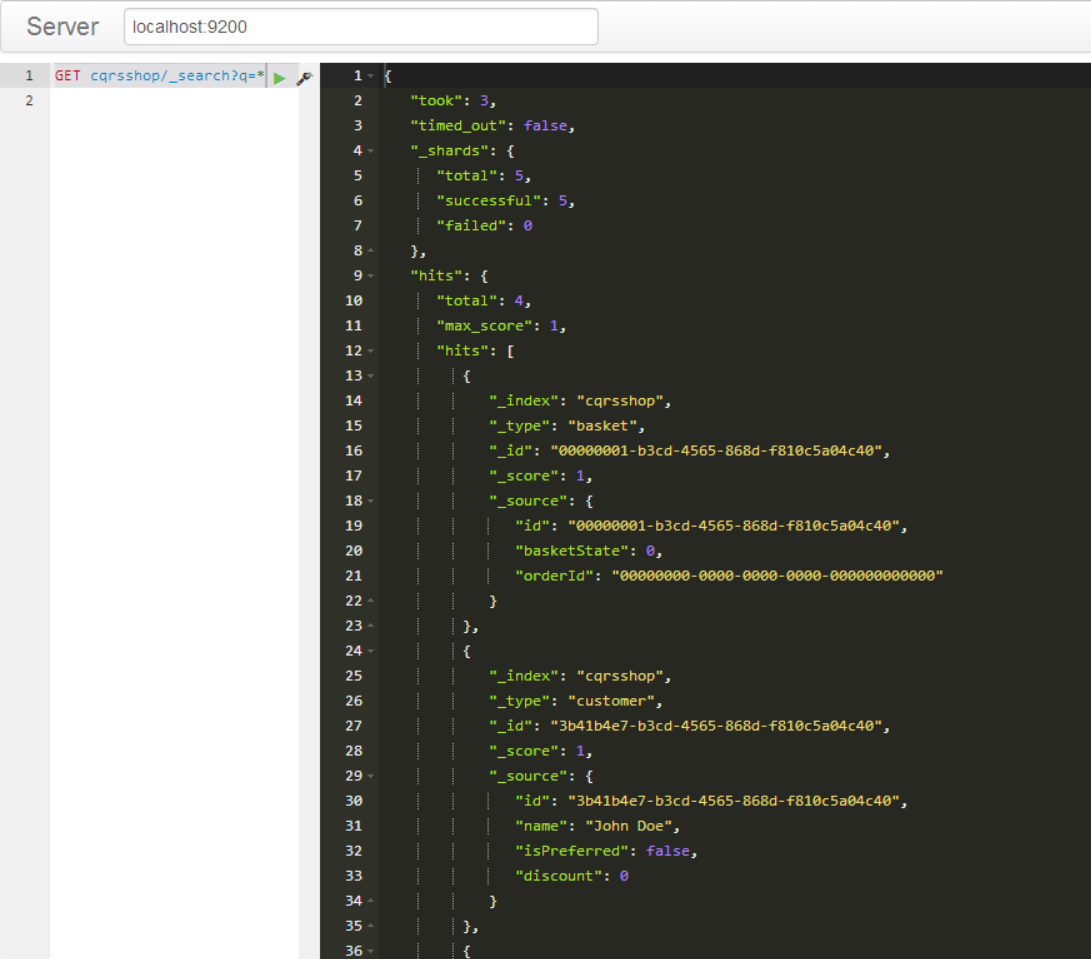 Elasticsearch is now up and running, but I'll add one more integration in Integrating neo4j.

CQRS the simple way with eventstore and elasticsearch: Let us throw neo4j into the mix

We need a change in the industry. All to often we defend old solutions just because we don't know…

CQRS the simple way with eventstore and elasticsearch: Build the API with simple.web

We need a change in the industry. All to often we defend old solutions just because we don't know…