I've been using TeamCity for quite a while and trusted it to do the right thing when it comes to building. It has a lot of built in feature to do so, but the moment you start to define your build inside TeamCity you have painted yourself into a corner. I still think TeamCity is a great tooling triggering my builds, but I have come to realize that I should start to put the actual definition of the builds outside of TeamCity, or whatever CI tool I am using.

Many people argue that it works just fine with using TeamCity and other CI tools to define the way you build, and it is when you have a set of smaller projects I think. The moment when you need to do more things in your build it make sense to put it in a separate script file and here are some of my reasons:

FAKE is a domain specific language, dsl, for build tasks implemented in F#. That it is implemented in F# doesn't mean you can only build F# projects, in fact you should event be able to build java project if you would like to. F#, along with many functional programming languages, is terrific when you want to create a dsl, since functional programming languages often are more expressive and not as verbose as OO languages. This is not an introduction to FAKE, and the documentation is here if you want to check it out. Later in the post I will go through what my FAKE script look like to solve the problems I imagined.

The thing I wanted to try was this:

Illustration of the flow from code to deployment: 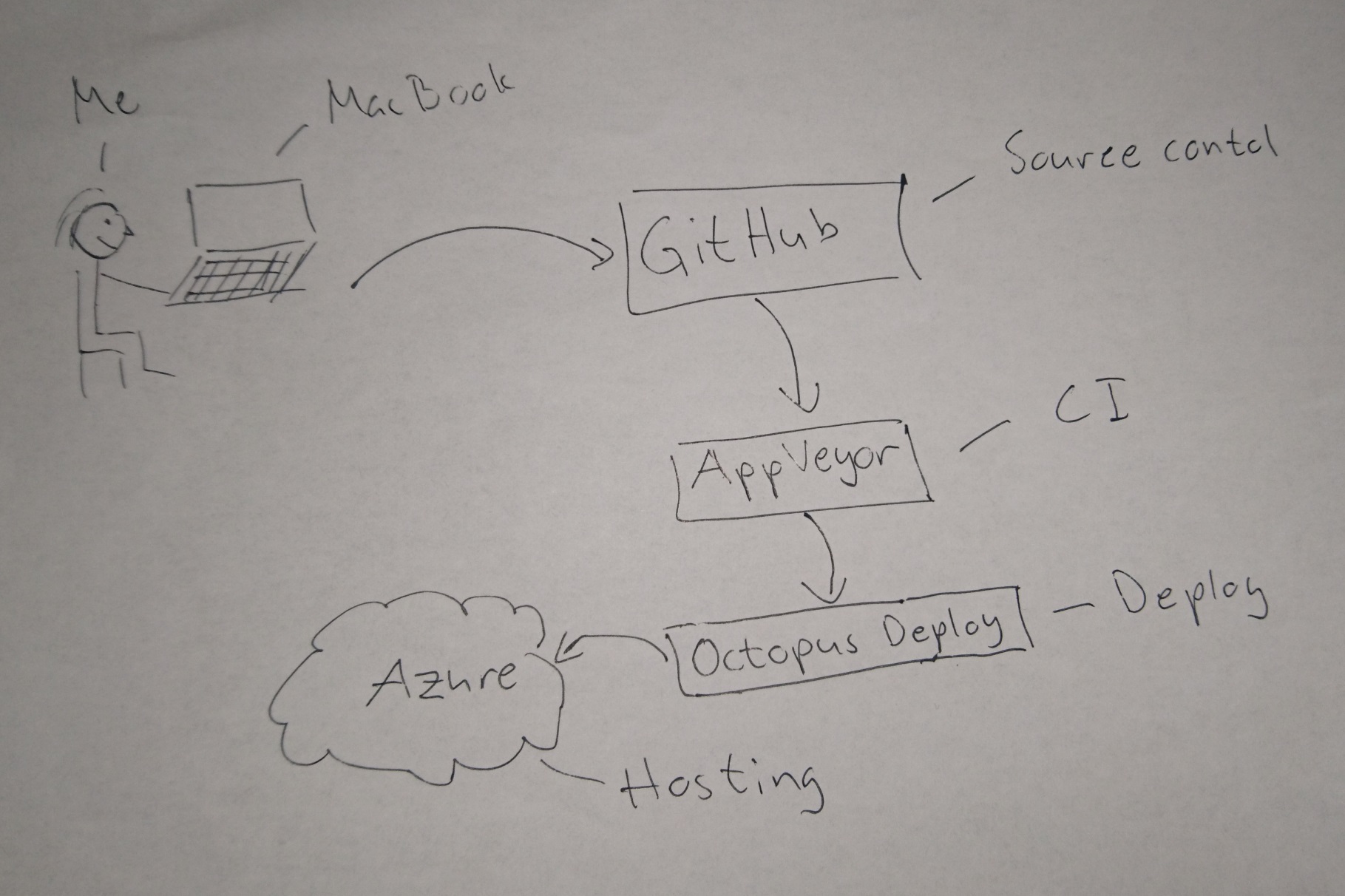 I think the end result is really good since it is the first time I used FAKEand AppVeyor. If you want to see the sample app and also the builds scripts they are in this repo at github: https://github.com/mastoj/FAKESimpleDemo

I could as well used TeamCity, but I thought I would try Appveyor out. The goal of AppVeyor is:

AppVeyor aims to give powerful Continuous Integration and Deployment tools to every .NET developer without the hassle of setting up and maintaining their own build server. - About AppVeyor

Their goal is the reason I think AppVeyor is interesting and I wanted to take it for a spin. The experience has been truly amazing with really fast build times and easy to get started, and another really positive aspect is that I don't have to think about maintaining the build server.

AppVeyor can do a lot more than I did, one might even argue that I should use AppVeyor instead of Octopus Deploy for deployment, but this is a proof of concept for a scenario were I still will have Octopus Deploy and I really like Octopus Deploy :).

When you configure AppVeyor you can do so in the UI or with a yml-file. Of course I choose to use a yml-file since I do want as much as I can in source control. The configuration file I created is minimal since I have FAKE that take care of the actual build process:

I alos added some environment settings in the UI like this: 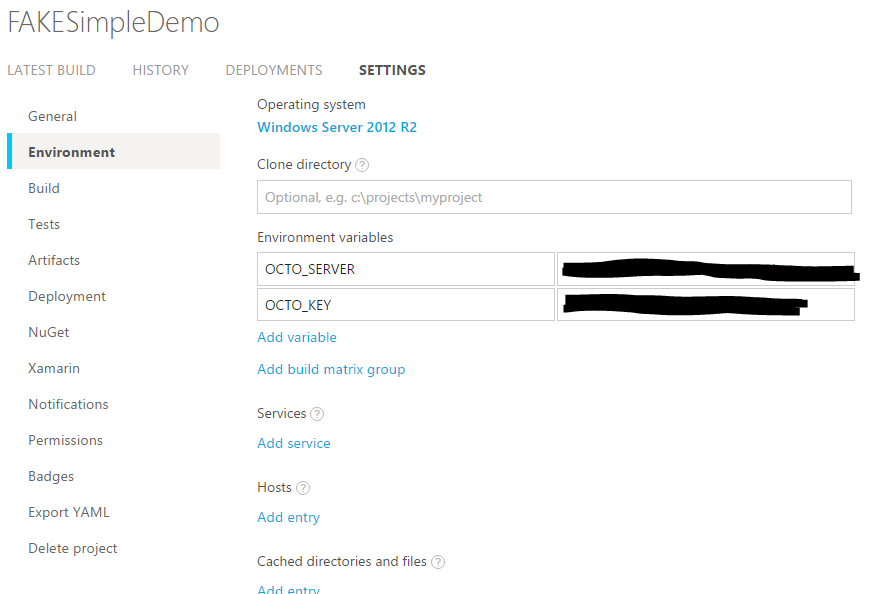 The reason I added them there and not in source control is because that is not I want to have on GitHub. The same would apply if I needed some other "secret" settings during build, then I would add that a a environment setting in the UI. I do the same thing if I use TeamCity.

I'm not going to go through what Octopus Deploy and what you can do with it, all you nned to know is that it is a great tool for handling deployments to multiple different environments locally as well as in the cloud.

To deploy to an Azure Web App you need to create an account under Azure that is an Azure account. You create accounts in Environment->Accounts. To create an Azure account you will need a Management Certificate (.pfx) and your subscriptiong id. I don't remember which guide I followed to generate mine, but this might work: https://azure.microsoft.com/en-us/blog/obtaining-a-certificate-for-use-with-windows-azure-web-sites-waws/

When that is done you just add your project and creates a deployment step of type Deploy an Azure Web App and you are good to go. The step configuration should like something like: 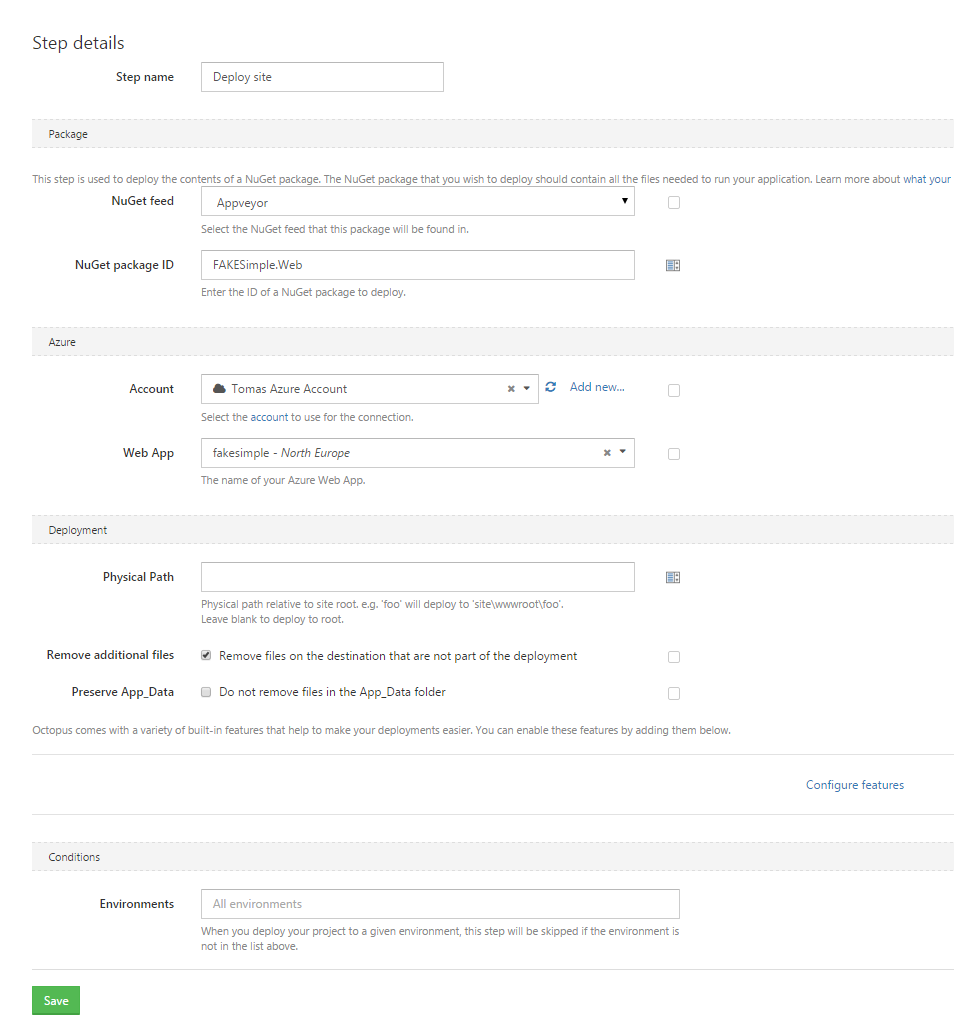 This is were all the magic happens. I will try to break down this file: https://github.com/mastoj/FAKESimpleDemo/blob/master/build.fsx and explain the different parts of it. I expect you to know the minimum basics of FAKE, that is, what is a target and how you set up a build process with the ==> operator.

To get FAKE running easily I also have a bootstrap file build.cmd.

All this file does is installing the tools I need to build the project, and then calls the build script with the arguments provided.

I separated the build script into some modules to make it easier to follow and I thought I would go through this module by module.

The demo application had a simple js-app (that alerted "Hello") to show that it is possible to build js-apps with FAKE. I would be stupid if I did not use the tools from the js-community to do the heavy lifting here, so that is exactly what I did. You can find the package.json here and the gulpfile.js here. I won't cover those since it is a different topic. When npm and gulp was configured all I needed to do was trigger it from FAKE and to do so I wrote a simple Npm wrapper. (I might extract this and try to submit a PR to FAKE later). The code is quite simple:

The Npm function is the important part. There I take the default arguments, pass it through f which adds changes to the arguments and then that is passed to run. The run method parse the Command property and execute Npm. It doesn't get simpler than that.

There were two things I wanted to do with Octopus Deploy; create release and create deploy. This helper module is a wrapper around the Octo module in FAKE since there were a lot of similarities between the steps.

All that is going on here is that I read some things from environment variables that should be configured on AppVeyor (or the CI you use) and then execute an action against Octopus Deploy.

I extracted the things that dealt with AppVeyor integration to a separate module to keep my targets clean (I get to the targets soon). It is actually one thing I'm doing on AppVeyor and that is publishing the artifacts to the nuget feed hosted by AppVeyor.

The publishOnAppveyor function takes a folder and finds all the nuget packages in it. After that it executes the appveyor command to publish every package to the feed.

The module name isn't perfect, but what is. It contains all the variables that are used in the targets as well as two three helper functions:

The getOutputDir is used to get the name of the folder of a file, it says proj but it could be any file. I'm using it to create one output folder per project instead of everything ending up in the same folder or under bin/release as it usually does when building from VS. It is using the convention that the parent folder name of a project file is the name of the project. The build function is a wrapper to build one single project at a time to be able to specify the output folder per project. I don't bother to explain the getVersion function.

This is where I define all the separate steps. When I have all my helpers settled it is quite straighforward:

The responsibility of each target is as follows:

There were many steps there, but I think it is nice to have that separation in place. I could probably combine some of the steps, but I like it as it is since it is easier to move things around if I want to.

The last part is to defined the dependencies between all the targets, and here it is:

I most likely only want to run down to Test locally and need to make some adjustments to run everything locally, but it is doable. The important part is that I can create an actual artifact locally, and that I'm doing it the same way as I would on the build server.

This post became longer than I thought, but I hope you see the use of using FAKE. Once more I think F# shows that it is a good fit for many different problems, not just science and math. If I start a new .NET-project today I would definitely add FAKE as one of the first things. That gives me a reliable build that executes the same way on the server and locally as well as version control of the build process compared to having it all configured in the CI server.

If you find any improvements, please comment here or on GitHub. You should be able to clone the repo and just execute build.cmd Test to get started.

One or two months ago I saw a presentation [https://www.youtube.com/watch?v=xsSnOQynTHs] by Dan Abramov…

Constraints in F# is a really powerful feature, but it is also an area that I think is missing…